the Alt-right in action

On the eve of the French presidential elections, we analyse the campaign that targets Emmanuel Macron, and which is largely a result of action from abroad France.

The activity levels presented here do not indicate anything about the content of the tweets which can be “positive”, “negative” or “neutral”. Political communities are defined in a purely technical way. Membership in a community does not mean membership of the associated party. The same party is often composed of several sub-communities around its main personalities. See the methodology for more information. 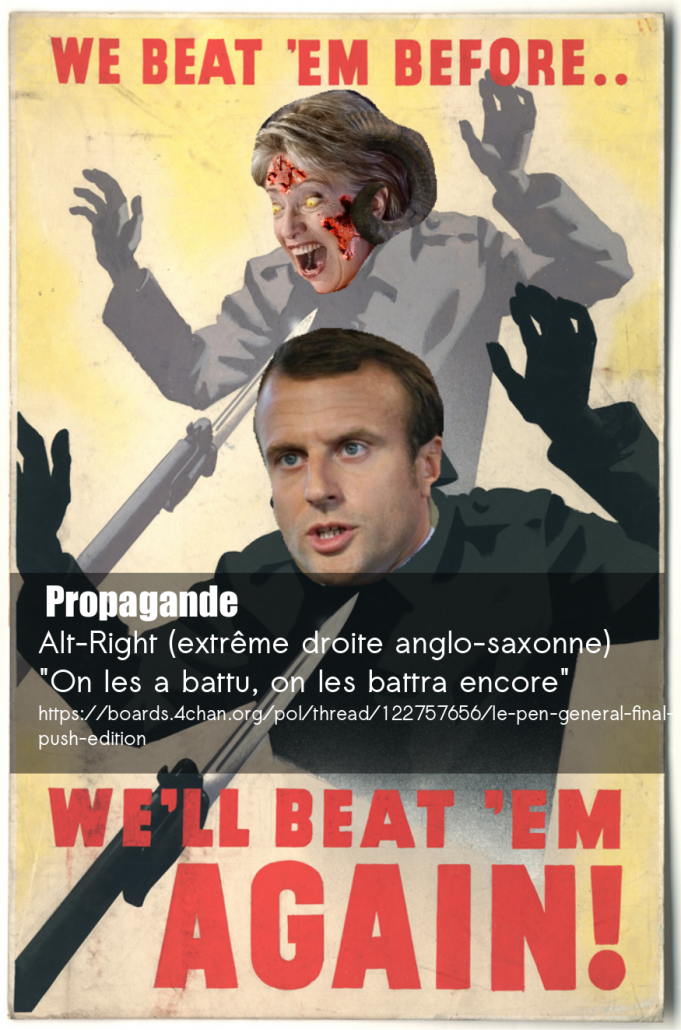 In the aftermath of the first round, on April 25, 2017, a group linked to the extreme right of the United States met on the 4chan site to organize the “final push” against French democracy, which may take the form of a “Final putsch”. “We beat ‘em before, we’ll beat ‘em again,” they said boasting that they had already tipped the American election. Their target: Emmanuel Macron, the man to be defeated to make triumph the French extreme right, led by their “golden queen”.

Their plan of attack, lead a campaign of denigration and massive disinformation on Emmanuel Macron. This plan is accompanied by a series of techniques of manipulation of opinion and advice as to what repels, disgusts or scares the different French political communities. The two main targets: Les Républicains (right), that should be addressed on the topic of immigration and terrorism; and the Insoumis (Melenchon, left of the left), which it is advisable to approach from the perspective of finance, the rejection of elites and neoliberal Europe.

The objective: that french people abstain or vote Le Pen.

The multitude of messages going in the same direction will eventually convince a few percent. And it is well known that the victories of these days are narrowly won (1% for Trump).

These communities will be all the easier to target as they post and read Twitter messages with well-identified keywords, the famous #hashtag: #laforcedupleple, #melenchon, # sansmoile7mai, #franceinsoumise, #jevotefillon, #fillon etc. In any case, small sentences out of their context and shock images correctly retouched will succeed to create or reinforce a negative opinion on the challenger of Marine Le Pen by denigrating, ridiculing or demonizing him. Mostly, advice will be given to produce “corporate” messages, which seem to come from the communities themselves and will be easily shared. These groups hope that a massive action in the three or four days before the election will do the trick.

With the Politoscope (http://politoscope.org) an open platform of the CNRS Institute of Complex Systems (http://iscpif.fr), for 9 months we have observed the political communities on Twitter, which we have broken down into a core of about 100,000 most active accounts (probably political militants) and a periphery of about 1,140,000 accounts interested in the policy that we call the “sea”.

We analyzed the tweets circulating in the periphery, i.e. relayed by the accounts of the owners the most likely to change their minds because of their less political involvment. We can, as a first estimate, say that about 40% of the tweets circulating in this peripheral political twittosphere were originally written by people from abroad and more likely by people residing in the United States. This figure is to be specified by more in-depth analyzes, but its order of magnitude is a certainty. These 40% contain retweets, that is, messages relayed by accounts other than their original issuer, which can quite possibly be accounts of French people. It is even quite probable that the French people who participated in the distribution of these tweets written by members of the extreme right-wing American were not aware of their origin, which was precisely the goal of this online campaign.

Since the first round of the presidential election (April 23, 2017), we analyzed more than 350,000 tweets targeting Emmanuel Macron (*). The first peak was recorded on the day of the group’s discussion of the far right on 4chan (29,000 tweets). The tendency is accelerating with the approach of the second round, with more than 93,000 tweets for the single day of May 6.

We measured that in the tweets sample collected by the Politoscope, 17% of the tweets circulating in the sea on may 6 (the day before election), where targeting Emmanuel Macron. This is huge.

It is now a classic, already observed in previous elections (see the analysis “Ali Juppé” and the first round of the presidential election): misinformation campaigns increase considerably in the three to four days before election, when polls and campaigns stop because of the mandatory reserve period. The content of the messages reflects a strategy that plays on emotions, fear and lies rather than arguments. Coupled with hacking and leak campaigns, the goal is clearly to turn public opinion at a time when it is the least informed and most vulnerable.

In the age of digital and social networks, this type of manipulation is inevitable, but an informed voter is worth two. 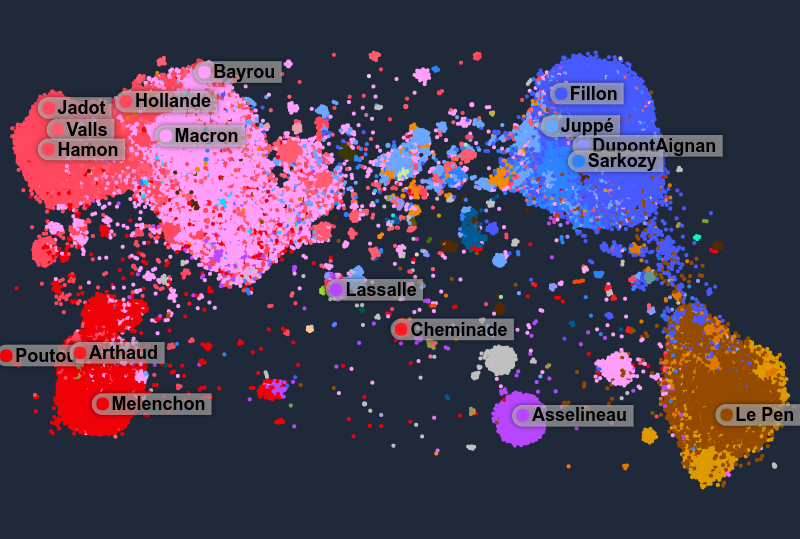 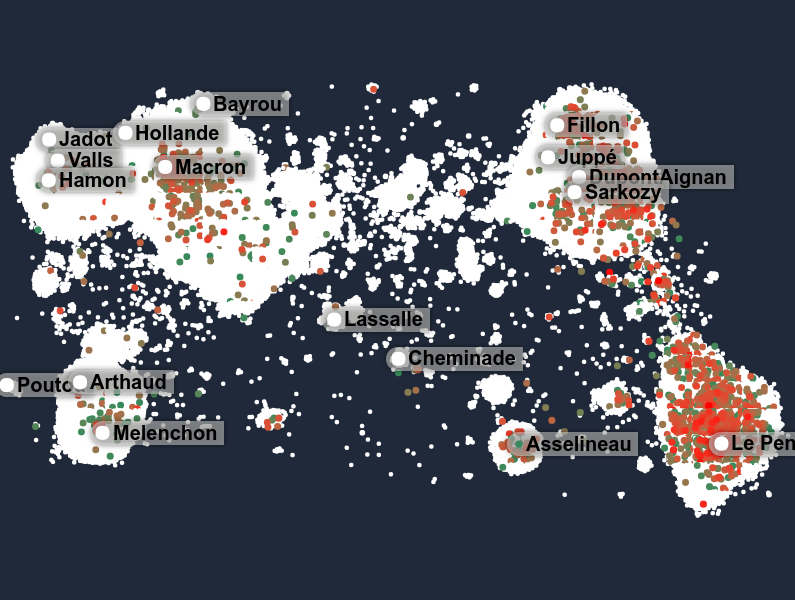 Campaign against Emmanuel Macron on the eve of the second round. On these images, each point is a Twitter account. In the image on the left, the colors indicate the political communities organized around the main political personalities of this campaign. On the right-hand image, the color indicates accounts that have issued at least one tweet with one of the expressions  #MacronLeaks OR #MacronGate OR #macronleak (see above for the full query). The reds are the first to intervene, the greens the last. The size of the circles is proportional to the number of tweets of this type issued by this account.

The graph below, shows the evolution of the number of these tweets, per political communities and for the “sea”

Campaign against Emmanuel Macron since the first round of the presidential election. The “sea” sees the movement growig day by day to reach more than 90,000 tweets per day on May 6 (17.08% of the accounts of the “sea” “), testifying to the virulence of this attack and its penetration.

Warning: these levels of activity do not indicate anything on the content that can be “positive”, “negative” or “neutral”. Political communities are defined in a purely technical way. Membership in a community does not mean membership of the associated party.